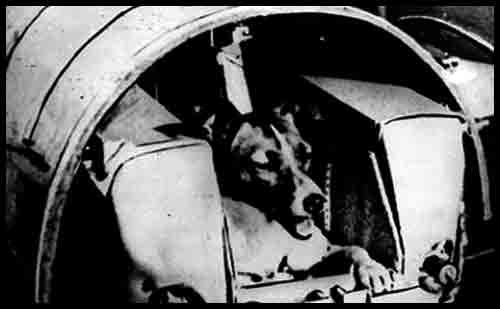 The Metal Ball With Legs

The tremors grew massive, Digging my nails into steel, I dreaded my shell falling apart. I could hear many voices, agitated, excited. Gradually, they grew distant, until all was still but the constant roar from the outside. A force pulled me to the ground, unseen but strong. I stayed down, tongue hanging limp, trying to soothe the bloody muscle pounding against my frame. Silently, I pleaded to the blinking lights, asking to be taken back to my old kennels. They soon stopped blinking.

The air was thick. My tongue lolled constantly, reaching for nothing. It was hot. I spread myself out, trying to cool down. Another hour. Hotter now. My limbs seemed like another’s, lying somewhere in my shell. I heard yelps. Mother. Or was it me? Hotter now. Another hour.

After 2,570 orbits, during re-entry on April 14, 1958, Sputnik 2 disintegrated, along with what remained of Kudryavka, known to many as Laika, the space dog. She breathed her last on November 3, 1957.

*This is part three of three; take a look at part one and part two. *