The Case of Lenovo India

TLDR: Ordered a Z510 from Lenovo India’s The Do Store on May 31; received a damaged laptop on June 7; struggled for a refund/replacement, eventually sending a legal notice; received a refund on August 1.

This post started off as a rant, but has since become an analysis. I hope this serves useful to potential Lenovo buyers, especially since their recent Y and Z series launch in India with 3 years of extended warranty that is useless in practice.

My theory is that Lenovo has been recently siphoning off defective parts to India and has not hired qualified support personnel to make repairs, including business-critical Think-brand machines. This is different from the occasional defect issues faced by any company: Lenovo has no option but to offer a refund, or stall the customer until they give up. This probably explains many of the complaints observable on their Facebook page.

The following is a timeline of events, followed by the story in pictures: 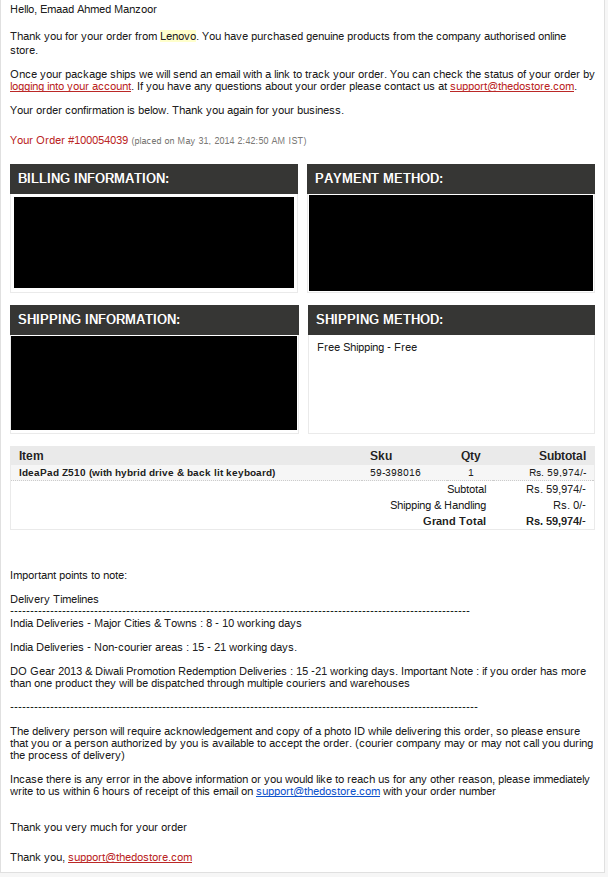 May 31: Placing the laptop order 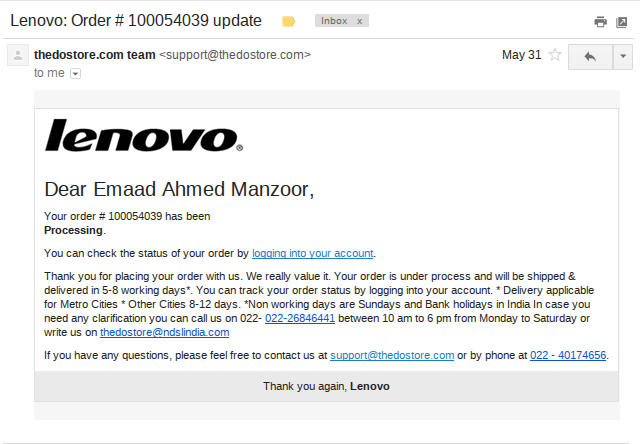 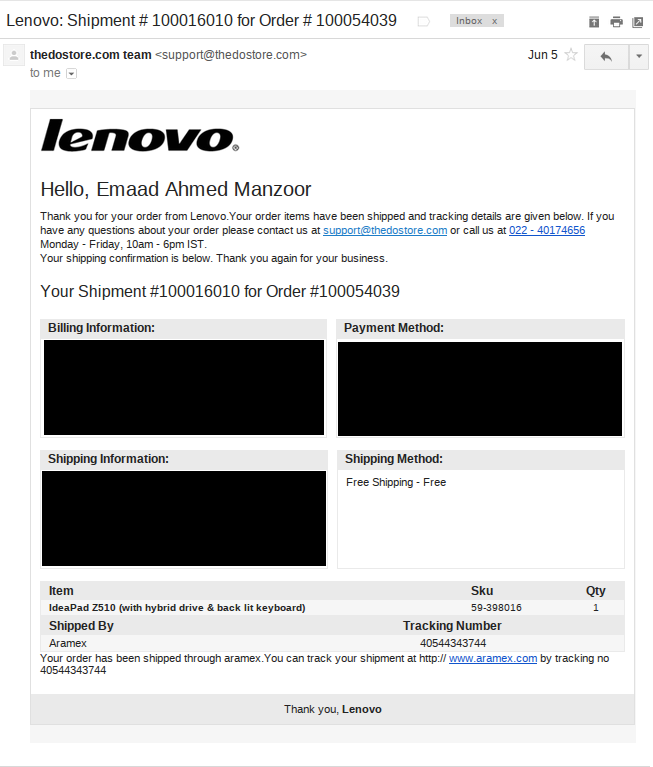 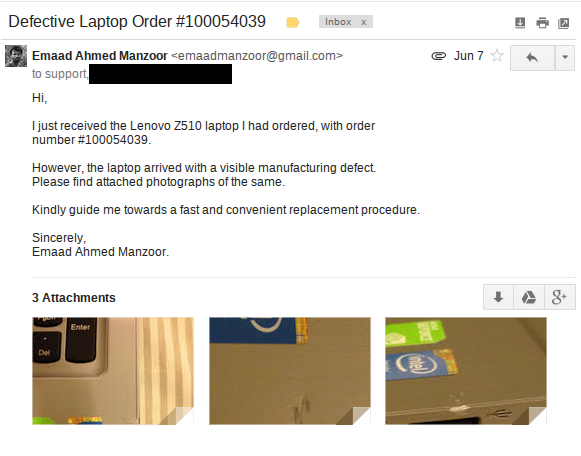 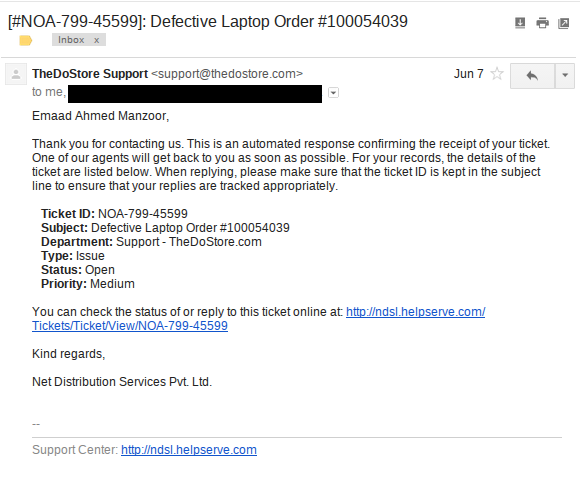 There was no response to this ticket (never was throughout the entire story). I made a few calls to Lenovo support. They had no idea about the aforementioned ticket or what The Do Store is. I was asked to provide additional details in order to obtain a DOA (dead-on-arrival) certificate. 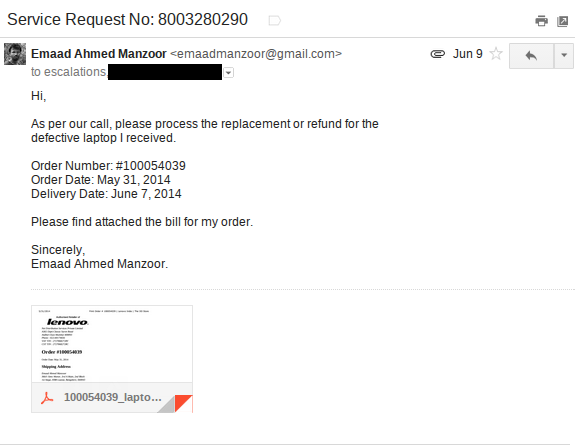 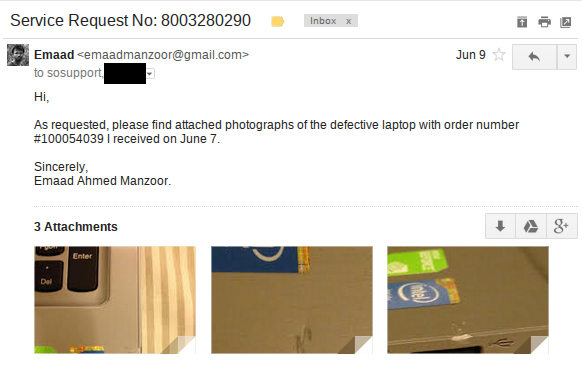 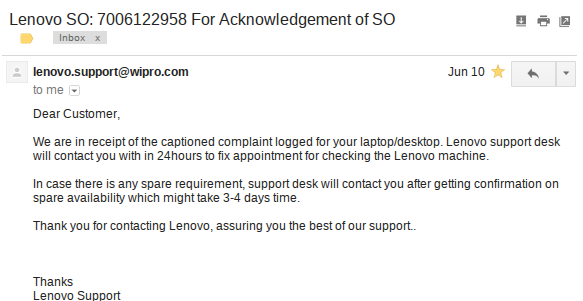 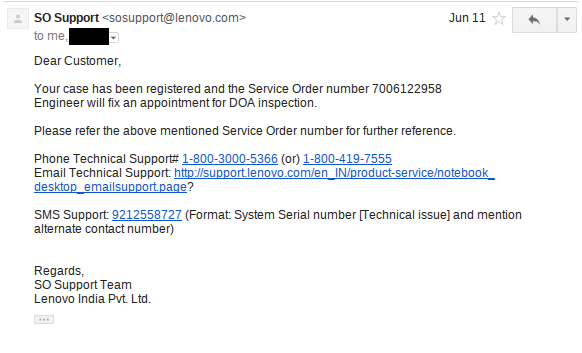 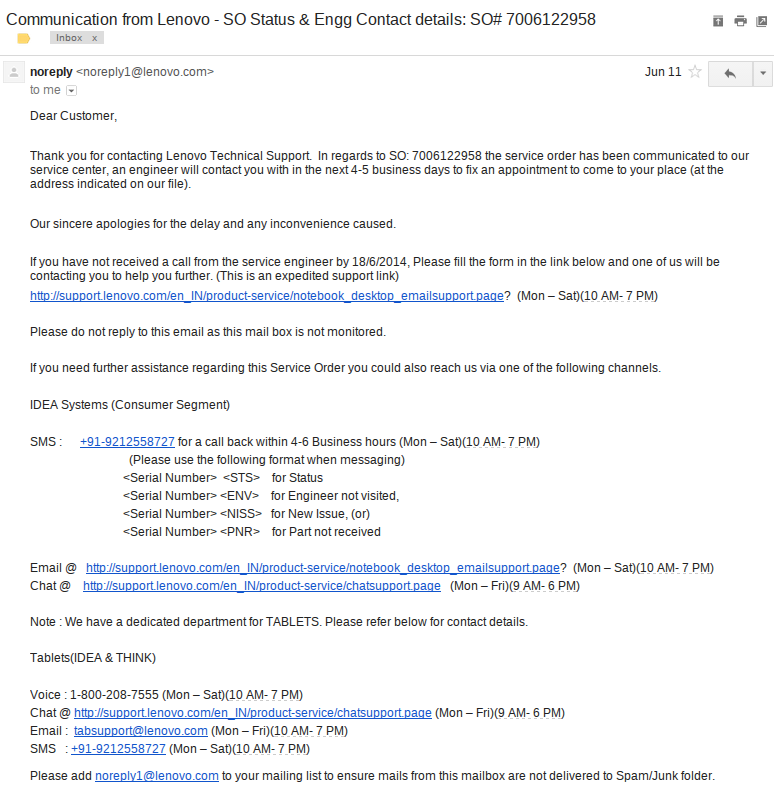 On June 12, a support engineer arrived at my place, inspected the laptop and issued us the DOA certificate. We communicated this back to Lenovo. This started a long, long thread with multiple recipients across Lenovo’s partner network. I have masked out names and email addresses in the images that follow.

Also note that there were two Wipro employees who greatly sped up the process, but still could not do much in the face of Lencare’s incompetence. 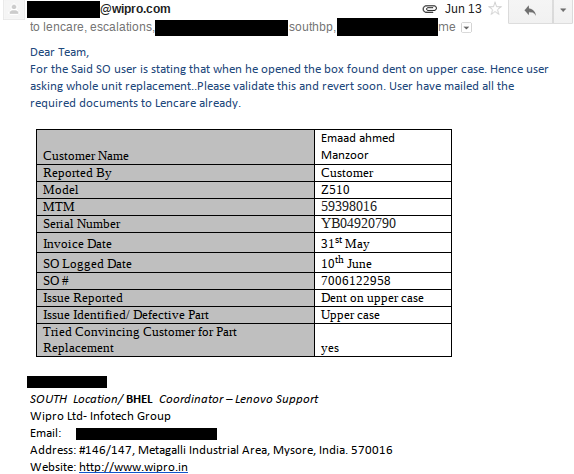 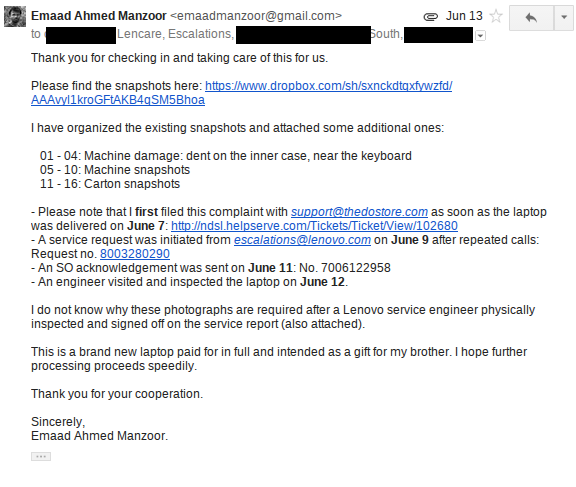 June 13: I organize the photographs better and re-send

June 17: Lencare ignores my email, requests photographs of the carton

June 17: I reiterate my email containing all the requested photographs

I had to use Dropbox due to Lencare’s 10MB attachment limit. This was not received well.

June 17: Wipro employee attaches and sends all the photographs

Over another phone call to Lenovo support, I am asked to email the invoice on the same thread.

Following this email, there was no response for a week. I followed up asking for one (a response on this thread never arrived).

June 24:: Requesting a response after getting none for a week

To my surprise, further phone calls revealed that my case had been rejected. No reason was provided.

June 24: Requesting a reason for rejection 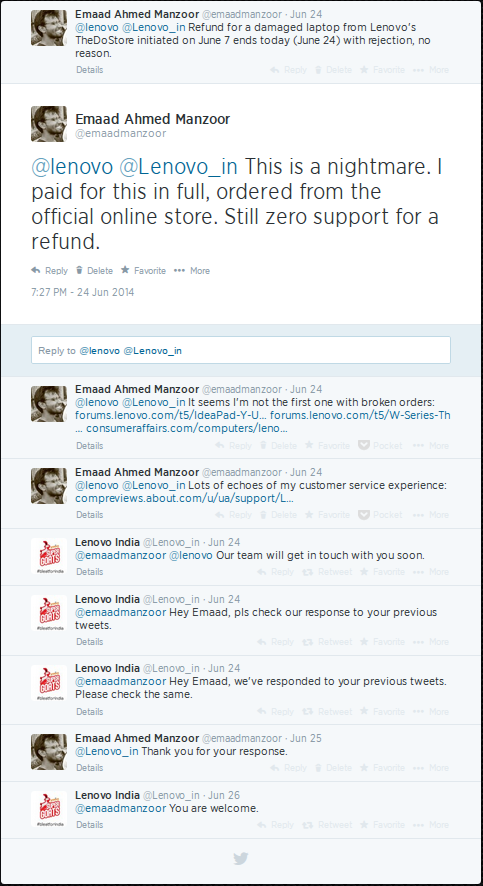 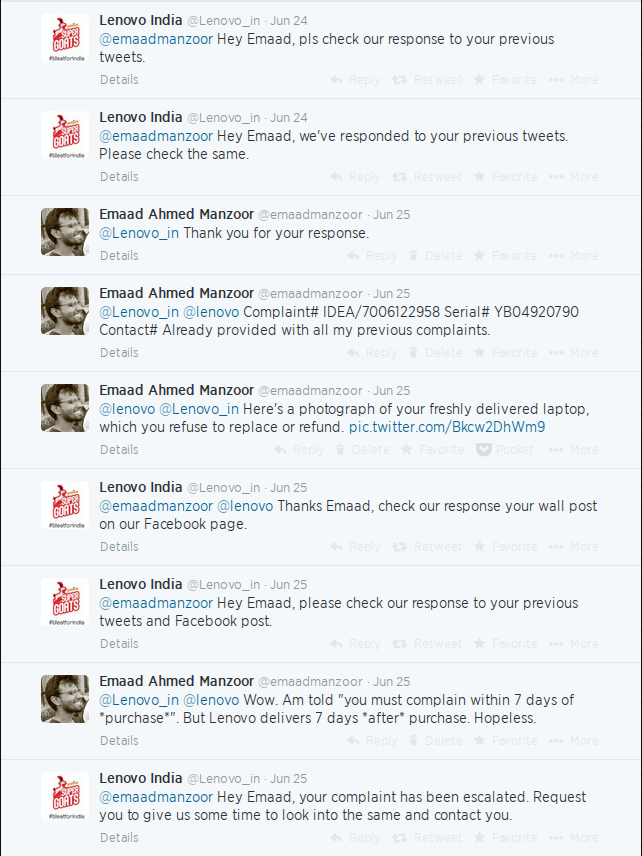 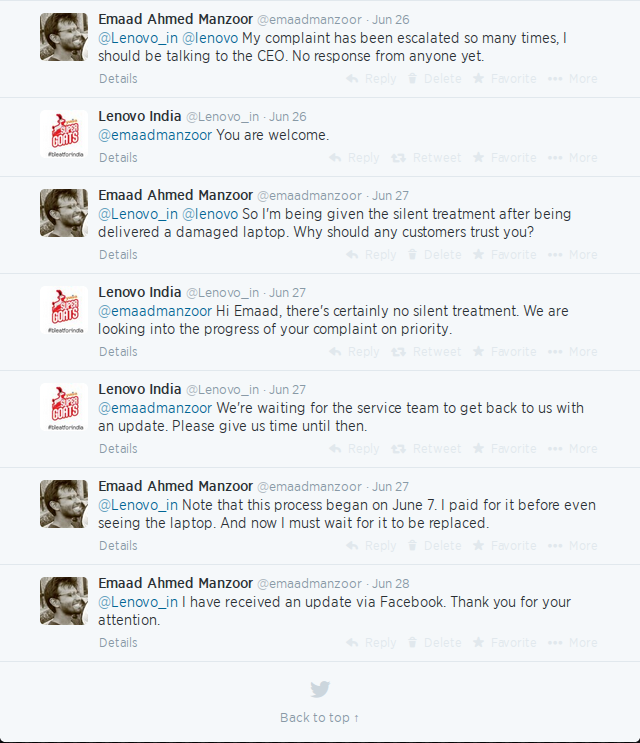 After more calls, Lenovo support claimed that I filed the complaint after 7 days of purchase (the laptop took 7 days to arrive), which was too late. I had still not heard anything back in writing. I emailed asking for clarification.

No response. I began contacting my lawyer. At the same time, I wanted a confirmed rejection from Lenovo in writing. 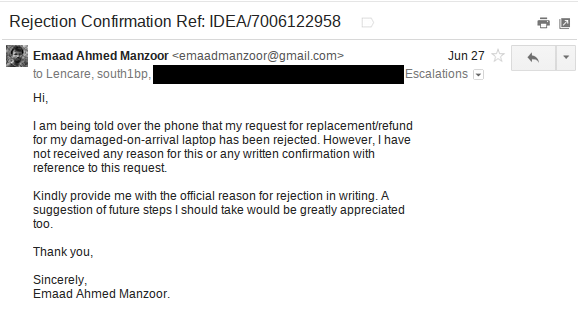 June 27: Requesting the verdict of rejection in writing

After even more calls to Lenovo support and more noise on Twitter and Facebook, I was asked to CC my email to another address. 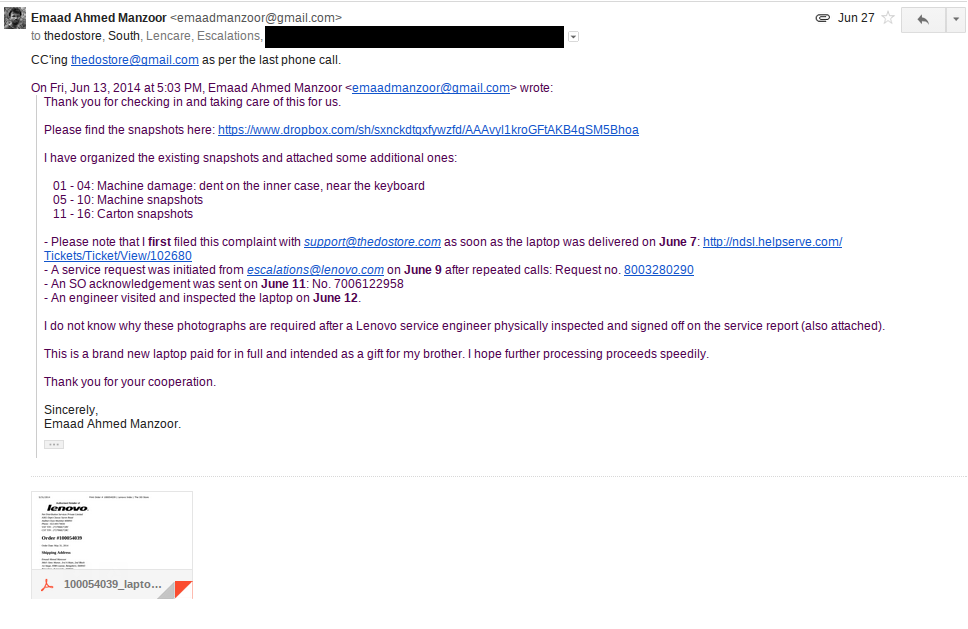 I finally obtained a rejection in writing via Lenovo India’s Facebook page. They claimed it was due to “customer-induced damage”. Make note of this expression and notice how it is forgotten after sending the legal notice. 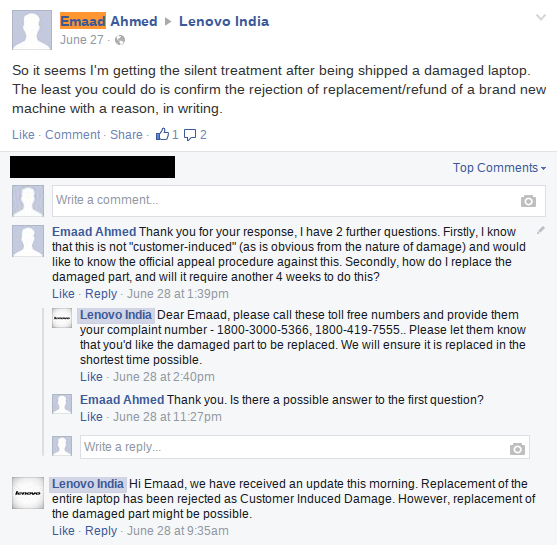 June 28: Receiving the rejection in writing

A distraction: The Do Store asks me to send in photographs of the product. I had to lose my cool at this point. 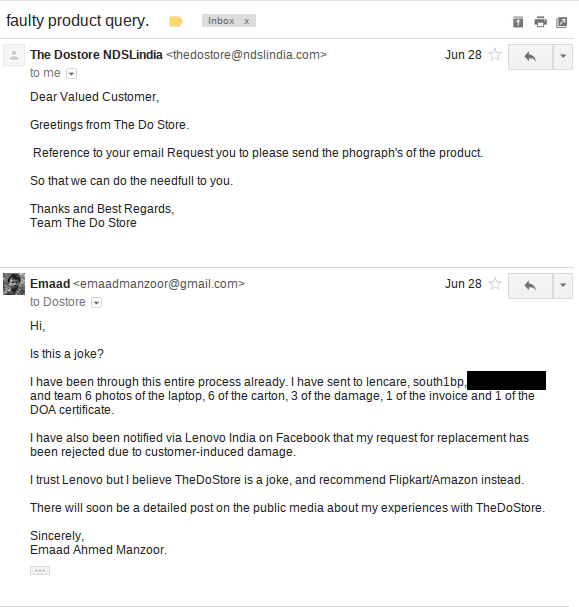 June 28: The Do Store requests photographs

Two days later, the DOA team wants to take a look at my delivery challan, to validate the claim that I received the product only on June 7.

I had finalized the legal notice with my lawyer at this stage. It was posted on July 1. The header below has an earlier date since it’s from a draft.

I heard back from Lenovo on July 3! 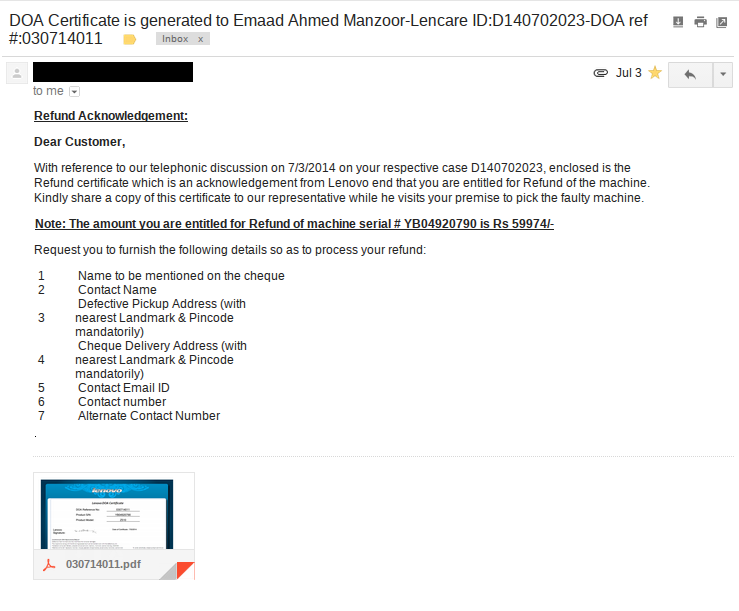 I provided the details requested, but didn’t hear back for another week.

July 7: Requesting a response for my cheque details

Conveniently, the ticket I had created on June 7 was marked resolved. So it appears someone at the NDSL distributor’s had seen it but ignored it all this while.

I also received a nice post from NDSL distributors, claiming that it was a manufactoring defect and apologizing profusely. Remember the claim of “customer-induced damage”? 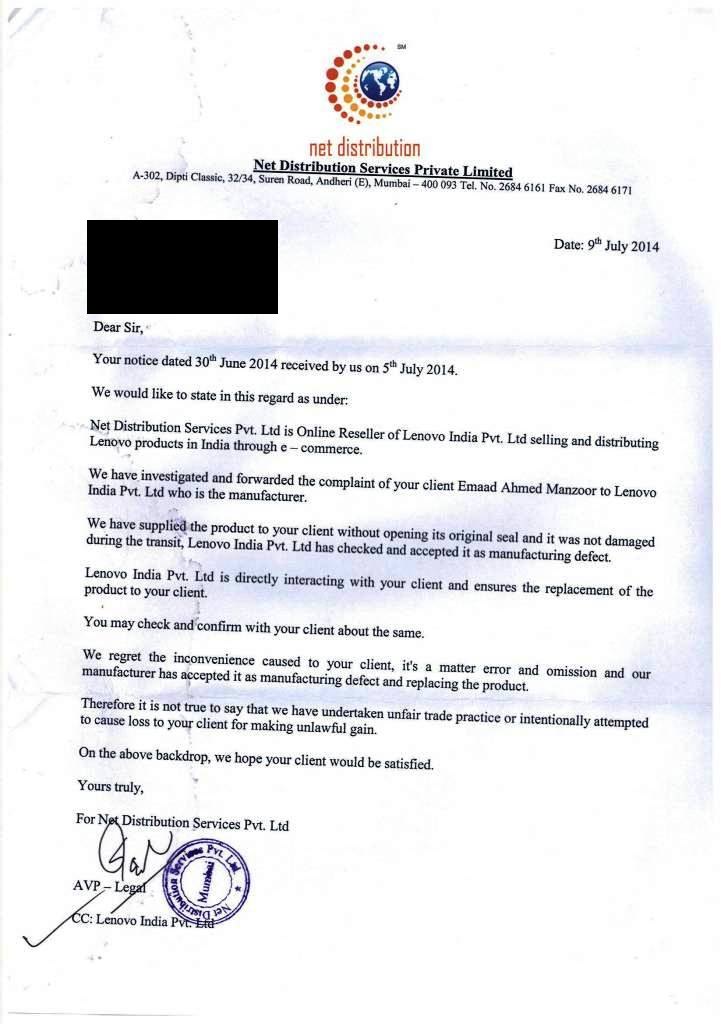 I also heard back from Lencare that they could not accept the cheque details I desired, because they needed the cheque payee to be the same person as the invoice recipient. I’m not sure why this took a week to notice. 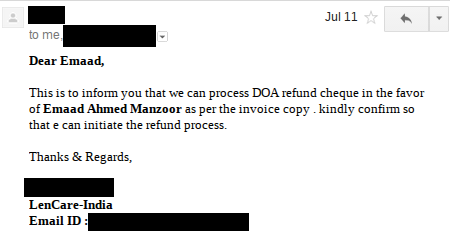 They accepted my details and said I’d receive communication within 8-10 working days, which I did from Proconnect supply chain management. Notice that they claim “Bluedart” would be making the delivery. 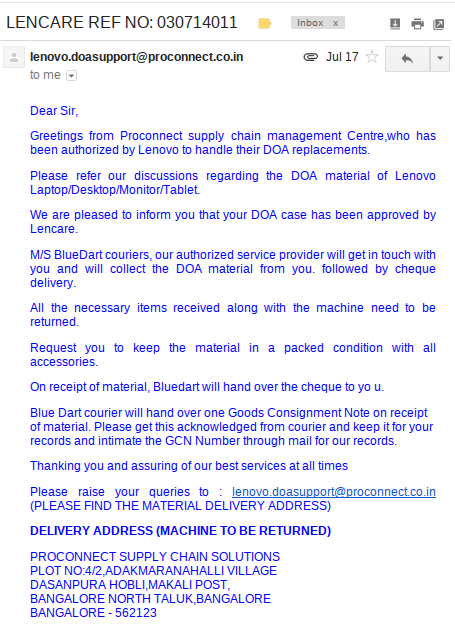 I didn’t hear back for another week, so I decided to check in.

July 26: Requesting a response from Proconnect

I get a response almost immediately, saying the cheque has been dispatched via GMS courier, not Bluedart!

It is not possible to track the location of a GMS courier shipment; the tracking page returns dummy results. 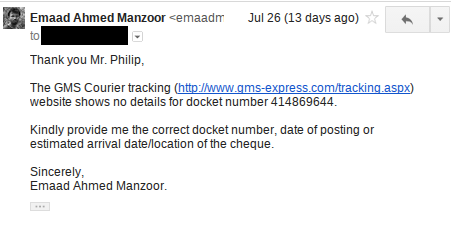 I never received any response to this. But I did receive my cheque in another 9 days, and returned the laptop.